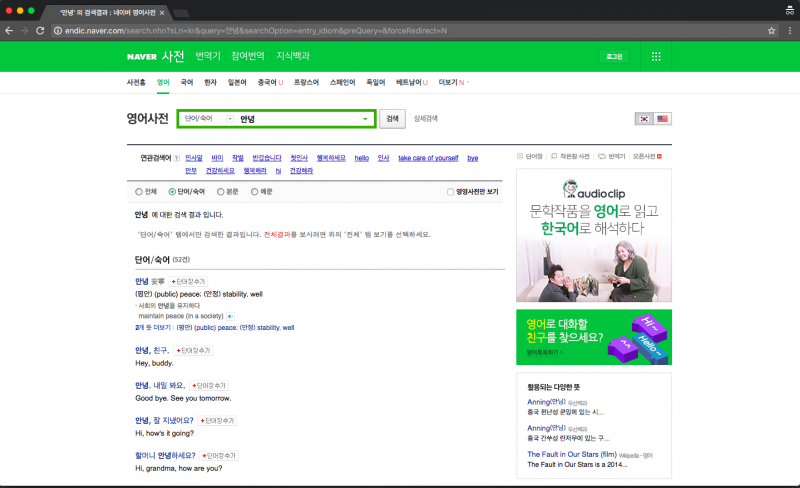 Here, you will see a list of all records of words and idiomatic expressions related to your search, which in our case as an example, the word 안녕.

Although Naver Dictionary calls the entries “Words/Idioms”, there are phrases and example sentences even.

Naver Dictionary gives you some conjugation examples in the phrases section too. A good mix of informal, formal, polite and even honorific conjugations to help you understand how to use the word in different contexts.

I personally consider this key function as the most valuable since the example phrases are contributed by native Koreans. Think of the Naver Dictionary and Daum Dictionary as a Wikipedia. 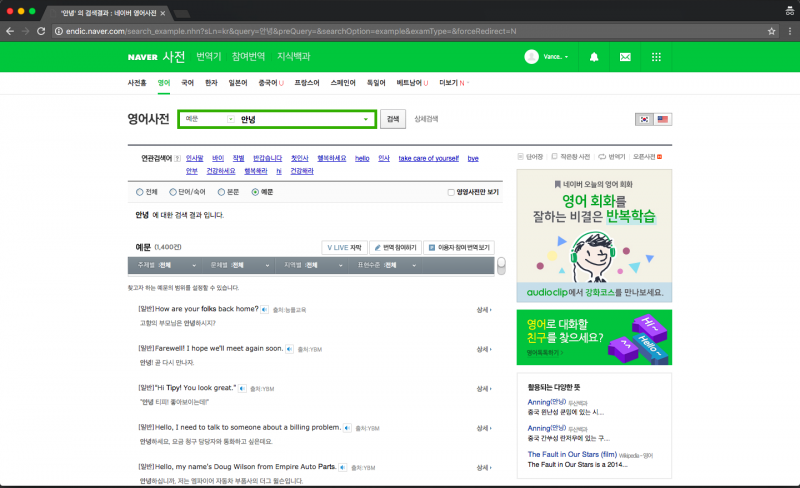 If you happen to be a fan translator like I was in the past, the Usage Examples (예문) function is your best friend.

Because most words and phrases can have very different meanings when used in different contexts, usage examples (and the translations beneath them) are lifesavers.

But… There are 1,400 entries for 안녕. Luckily for us, there is a filter function – the grey bar at the top. It can sort the entries based on Topic (주제별), Style (문체별), Country (지역별), Interpretation (한국어 해석), Expression (depth) (표현수준) and by Period (era) (작성연대).

However, I would say country, interpretation and period are not that relevant for most of our searches. Topic, style and expression depth are the more useful filters.

Here’s a list of the filters and their translations (there aren’t any on Naver Dictionary, unfortunately) for your convenience:

I can’t stress enough: context is important and determinant of the meaning and interpretation of words. The function to filter the usage examples provides a clear list of usages in the various contexts and situations.

Arguably, not every usage example is good. But in most cases, the usage examples contributed by the community should be good enough for you to have an elementary or even intermediate understanding of the word.

Committing the meaning(s) of words requires association with situations and contexts, regardless the language we’re learning. Therefore, look at usage examples as a way of remembering the words since most of us can attest to the fact that memorization is one of the worst methods.

You know how certain words – English, Korean or any other language – have multiple meanings?

How to find out the right translation when there are multiple meanings? How do you know which is the one you’re looking for?

If you’re either a beginner or intermediate, chances are you won’t even realise whether you’re picking up the right meaning of a word.

One way to remove some uncertainty is to reverse translate. That means keying in the Korean word and taking the English translation, and keying it right back into the search bar.

If some other weird Korean word pops up instead, it’s highly likely you’re getting the wrong translation.

There isn’t an easy solution to this, except to reverse translate all the English meanings and definitions Naver Dictionary throws at us. But hey, learning language isn’t an easy feat, right? 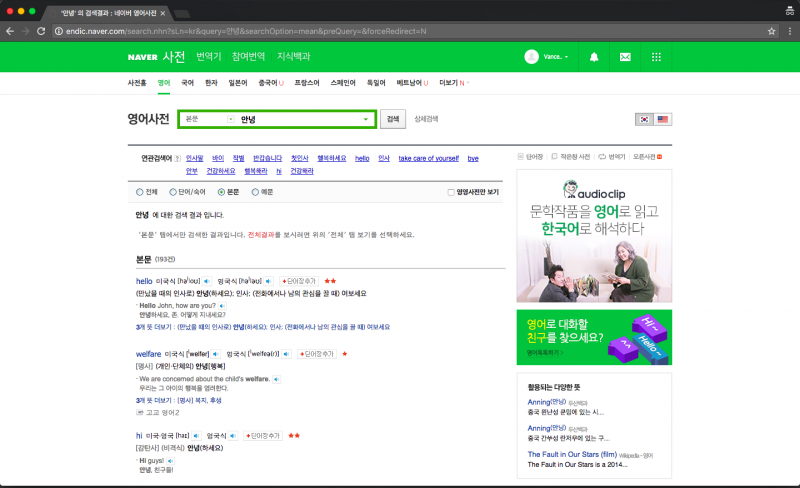 I know. It’s weird to have the meanings section below the words, idioms and phrases.

Ideally, you want a dictionary to give you the meaning(s) of the word you’re searching before any other information. But that’s just how Naver Dictionary operates, I guess.

Anyway, by using the meanings (본문) function, you’ll see all the different possible meanings the word or phrase you searched.

Remember, Naver users contribute these entries to Naver Dictionary and approved by the admins. So you’ll probably see some very similar meanings but nuanced.

If you’re looking for nuances depending on contexts, the meanings function is probably your best bet. Even a simple word like 안녕 has 193 entries, though most are probably very similar or even identical. 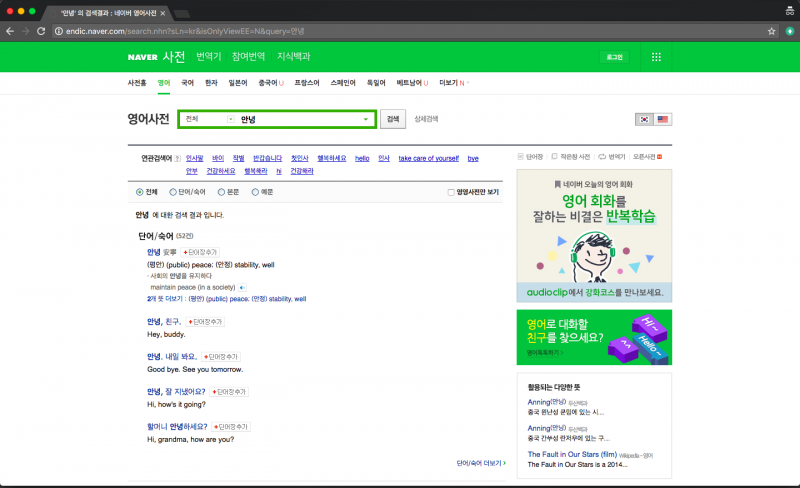 Think of the general search (전체) function as the overview and summary of whatever you’re finding. It is a broad view of the most commonly used definitions and phrases, examples, contextual meanings – everything.

You will use this function to search most of the time just because of how convenient and useful it is.

Sometimes, though, what you see on this page is insufficient. That’s where you will use the other key functions for more in-depth understanding.

At the bottom right of each section on the general search page, you will see some text ending with, “더보기”, which means to “see more”. That’s one of the two ways to access more in-depth explanations for each aspect of the word or phrase. The other way is to click on the radio buttons at the top of the page.

In most cases, the general search function is most useful when you already more or less know the meaning of the word or phrase but just need a confirmation.

Now that we got the technical aspects out of the way, I’m going to share some tips you can use when using Naver Dictionary.

The first tip I’m sharing with you is adding words to your vocabulary list. You’ll see a button beside almost every entry in the Words/Idioms and Meanings section. 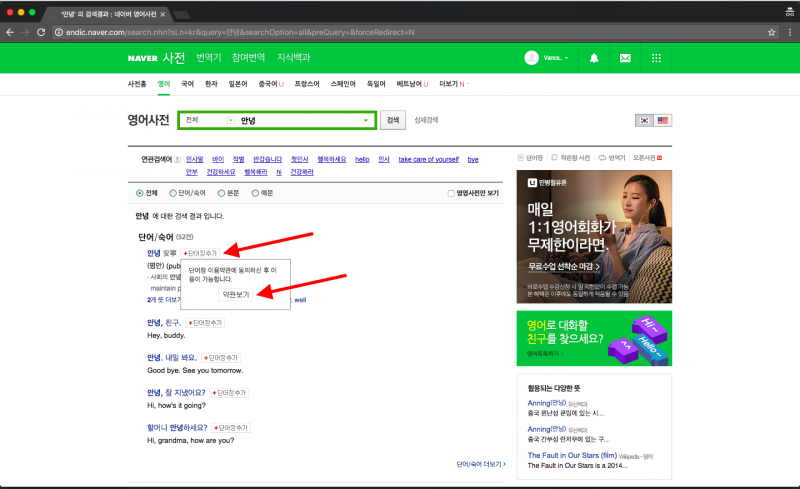 When you click on the button, whether you’re using the Korean or English version, a small window will expand below it. 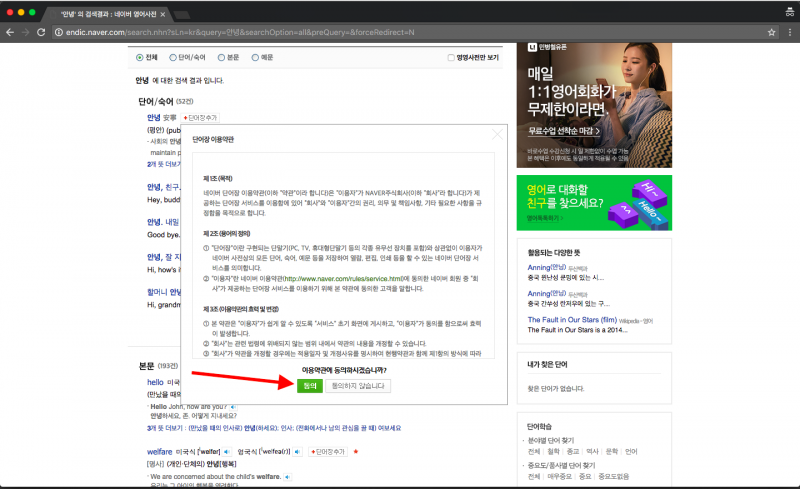 Without boring you too much, the terms and conditions are basically a way to protect themselves. There are private policies and user policies that you don’t really need to care unless you’re trying to hack Naver. A word of advice, though, don’t do it.

Click on the green button, which reads, “Agree” and the window will close. Next, click on the same button before the word or phrase. 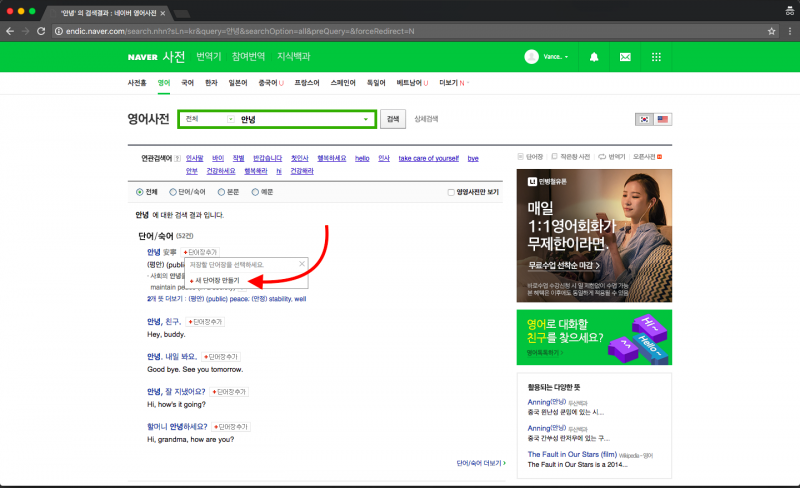 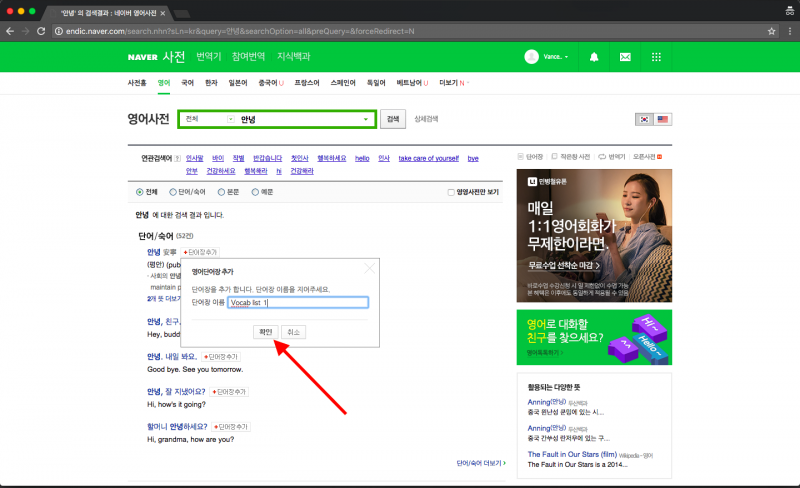 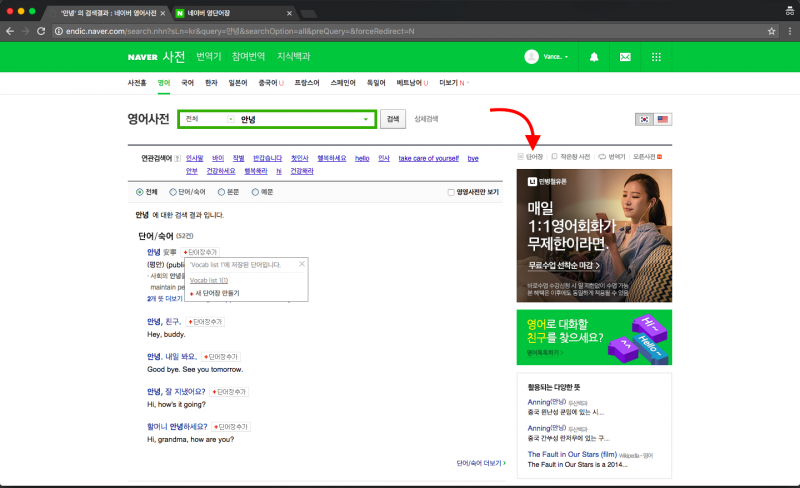 Tip 2: Search for words instead of phrases

I know, it might sound tedious and counterintuitive to key in several words instead of pasting in the entire phrase, just like how you would when using Google Translate.

Ask yourself, though, how reliable is Google Translate, especially when you’re keying in conversations and not textbook sentence examples?

Another way of thinking: contributors key in meanings and definitions of words in Naver Dictionary, not phrases. You can hardly find any online or traditional dictionaries that have a comprehensive phrases index.

That’s probably why translators and interpreters are still in such high demand despite the technology boom. It’s just too difficult for an AI or database to identify context.

So, until Naver Dictionary reaches that point, key in words instead of phrases into the search bar. It helps you understand the words and the language better, anyway.

The Naver Dictionary is the most widely used Korean dictionary online. Daum Dictionary is another popular choice and you can read our complete guide here. There are other online dictionaries but Naver and Daum’s are the simplest and best to use. 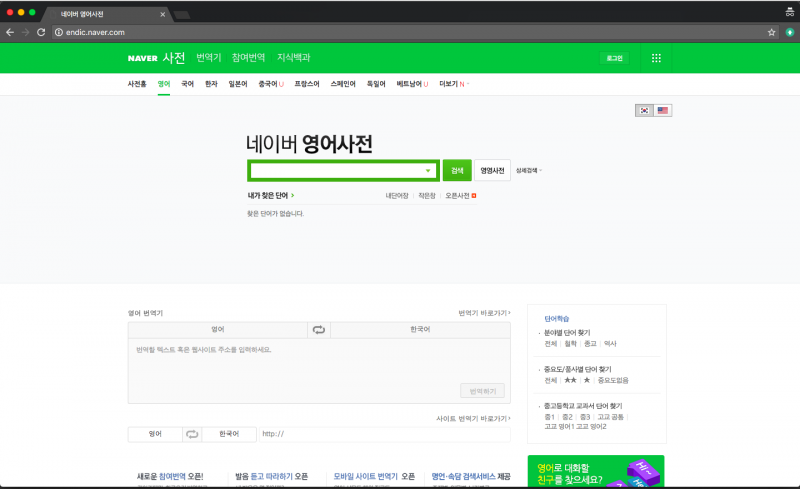 Above is Naver Dictionary’s home page. Just like any other dictionaries, you’ll just key in the word or phrase. For the purpose of this guide, we’ll look at a simple word, 안녕 (annyeong), which is an informal greeting commonly seen in K-Dramas and used in daily life conversations.

The Naver Dictionary offers countless functions but we’ll only look at the ones you’ll need for studying Korean. Look at this way: the other more complex functions are used by native Koreans or very advanced learners. 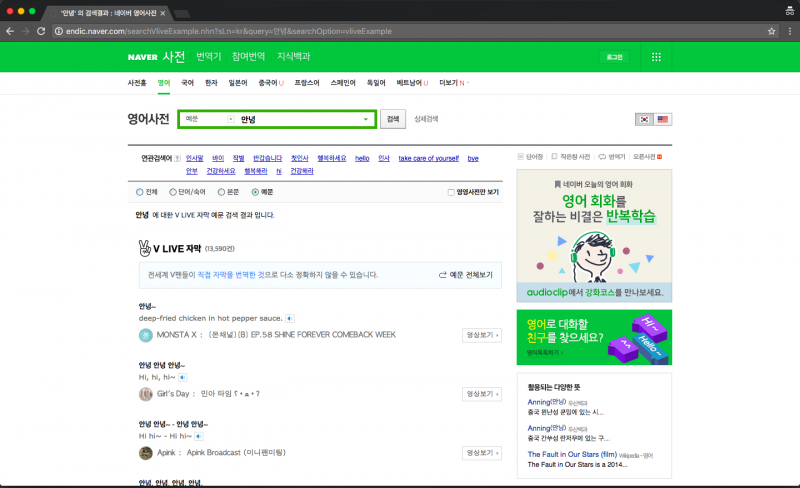 The V Live Fansubs (V LIVE 자막) function is every fan translator’s heaven. As long as your favourite K-Pop idol or group appeared on V Live, you’ll be able to find the translations.

A disclaimer, though, most of the translations are done by fans and are not exactly the most accurate. Nevertheless, a great resource because Naver Dictionary pulls the translations submitted by V Live translators (fans or not) and vomits on this page.

Another neat feature is the button beside the translation – view video (영상보기). It directs you right to the page with the video embedded on the page. What’s more, when you play the video, it jumps to the part where the idol said that phrase. 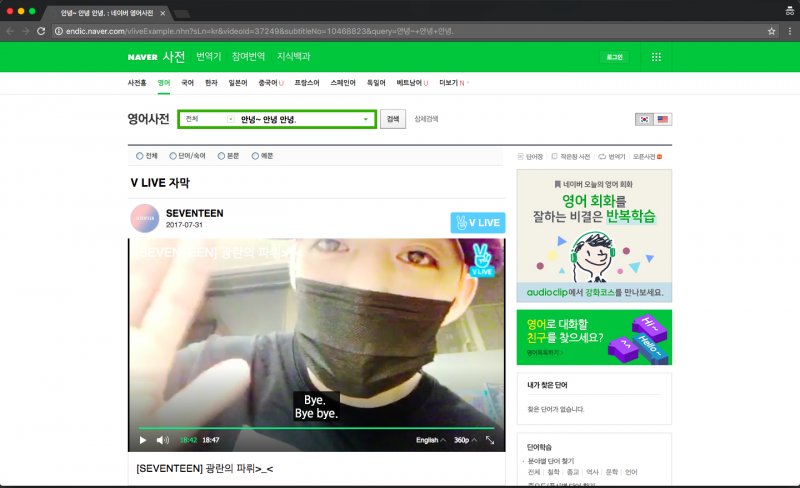 Other than being a rabbit hole for K-Pop idol fans to fall into and spend endless hours on, this key feature is merely an extension of the function. 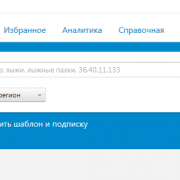 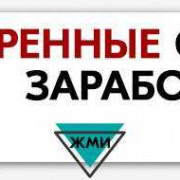 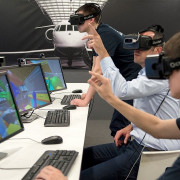 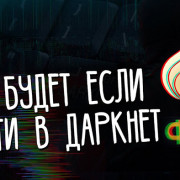 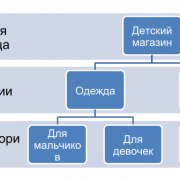